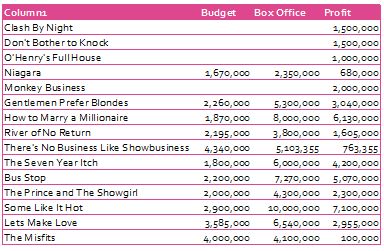 Let me start by saying that I know this is going to ruffle a few feathers. Let me make it clear, I am stating nothing about Marilyn’s dramatic acting ability. I don’t think anyone can deny that she gave fine performances in some of her dramatic roles, especially “The Misfits” and fan favorite, “Bus Stop.” It should also be noted that “The Seven Year Itch” and “Some Like It Hot” have commonly astronomical high return values. Using sources from the time, I have chosen to use the $6,000,000 figure for “The Seven Year Itch” and the $10,000,000 figure for “Some Like It Hot” because they appear to be the most reliable. I also have not included “We’re Not Married” because Marilyn’s role was relatively small.

How many comedies did Elizabeth Taylor perform in from 1952-1962? One (“Love is Better Than Ever”). Lana Turner? 4. How about dramas for Betty Grable? 0. Dramas for Ginger Rogers? 4. Marilyn had 8 comedies and 8 dramas/serious roles like Elsie in “The Prince and The Showgirl.” Far from having her dramatic turns routinely ignored, Marilyn was equally given roles in both genres, something that was extremely uncommon back then for an actress. Actresses like Lana and Liz were exclusively dramatic while Ginger (who is the closest to Marilyn with four out of 10 being dramatic) and Betty were relegated to comedies.

So why do we routinely hear about the big, bad studio typecasting her? Let’s get this out of the way, EVERYONE was typecast. Marilyn had artfully created her dumb blonde image. She used cheesecake to get herself up saying:

“I think cheesecake helps call attention to you. Then you can follow through and prove yourself”

That is not to say A-list dramatic actresses did not use cheesecake either but Marilyn fully embraced it, helping to cement herself in parts that played off of her appearance over her acting talent. Marilyn created her persona then tried desperately to run away from it. I suppose she was trying to pull something ala Joan Crawford but transitions like that were rare.

With that being said, we must also turn our attention to Fox. Yes, Fox typecast her like they had so many other actresses before and after Marilyn. That cannot be denied. Please scroll up and look at the chart above again. Notice anything? With the exception of “Bus Stop,” Marilyn’s dramatic roles were NOT making nearly as much as her comedic roles. Fox wasn’t going to throw money into pictures so Marilyn could play in serious roles when they could have hits if she stuck to her comedic skill set. The public was the ultimate typecaster of Marilyn, not Fox. They decided where their money went and they just weren’t eager to see one of the 1950’s pinup queens play dramatic parts. Marilyn’s top three films in profit include one dramatic part, Cheri from “Bus Stop”, which nudges out “The Seven Year Itch” by $870,000. This movie was billed as her comeback and I think it is safe to assume that a good portion of the audience was glad to have her back in any film, regardless of genre. The fact that she masterfully portrays Cheri is a huge plus. “Niagara” saw less than $1,000,000 in return while her next film, “Gentlemen Prefer Blondes,” was over $3,000,000.

In closing, Marilyn actually had a pretty diverse career. Her pictures were evenly spread out between serious and comedic and she shone brightly in most. Her ability to keep herself at a 50/50 split once achieving stardom is amazing. That deserves praise and recognition. What gets continuously old is the constant “Marilyn was abused by Fox and forced into comedy.” Lest we forget, Marilyn’s last movie was to be a comedy and it was her choice to do it. She kept up with the comedic roles nearly as much as Fox asked her to do them. If she had lived longer, I firmly believe she would have kept going with this 50/50 split and we could have seen some fine performances across the spectrum.

6 thoughts on “Opinion: Marilyn And Typecasting”