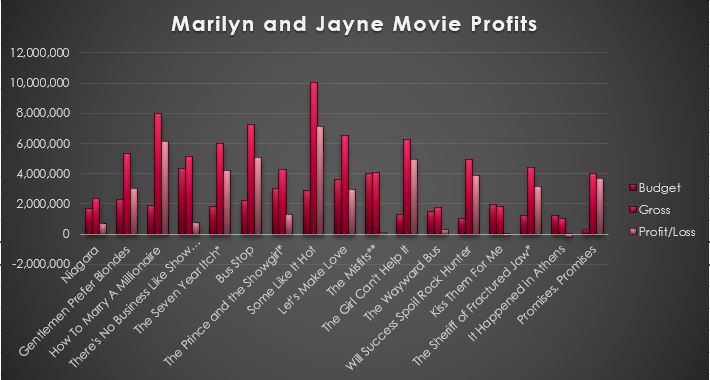 *Estimated Budget
**Note that the only profit amount is for US and Canada
***Jayne had many more movies from 1956-1962 (before being dropped by Fox) which allowed Fox to make a large amount on loan outs; however, budget and/or gross information is unavailable. Jayne also made more movies after “Promises! Promises!” but I included it being it was her first completed movie without being signed with Fox.

As you can see, Jayne’s leading debut actually grossed over seven times more than Marilyn’s leading debut. While Jayne’s movies never grossed as highly as Marilyn’s, it’s safe to say that she was a solid earner for Fox when she was in her element. People wanted to see Jayne in glitz and glamour but her movies also needed to have a solid story line, like Marilyn’s. Jayne tended to be offered sub-par scripts that were met with horrific reviews that deterred moviegoers.

Jayne’s “The Sheriff of Fractured Jaw” was Fox’s opportunity to revamp her career. She had pulled in more than Marilyn’s “Gentlemen Prefer Blondes” had six years before and could easily have been revamped for the upcoming 1960’s comedies. Jayne was even discussing doing “Something’s Got To Give” but negotiations were dropped once Marilyn signed on. What was five steps back for Marilyn would have been ten steps ahead for Jayne. While it is unlikely that Jayne would have been given a strong leading man like Dean Martin, it’s nude scene and Jayne’s lower cost (and tendency to always be on time and finish her movies on time) would have allowed Fox to make more than enough to keep the studio afloat during the disastrous filming of “Cleopatra.” Instead, Jayne’s last Fox picture was held on until 1962 (but made in 1960) and was released with little fanfare.

As to why Jayne wasn’t promoted after TSOFJ? I would assume because it came out the same year as “Some Like It Hot” and made almost $4,000,000 less. SLIH was an anomaly for Fox for a comedy; most grossed somewhere in the $3,000,000 – $4,000,000 range. Marilyn was back and willing to do dumb blonde roles so there was no reason to keep Jayne around.

Jayne also had the albatross of “Kiss Them For Me” hanging around her neck. What tends to be ignored is Fox’s promotion of the ill-fated movie career of Suzie Parker.  Suzie was expected to carry the movie but because negative reviews referenced Jayne’s continued squealing as getting repetitive, the movie’s failure was placed on Jayne. Fox would continue working with Suzie but her movies never did exceptionally well, probably because of the lack of any real movie presence. Suzie, while beautiful, has no real chemistry with Cary Grant and tended to seem a bit too cold to movie audiences.

Jayne wasn’t a bad actress nor was she “over” before she hit 30. She was just promoted incorrectly by Fox and dumped when Marilyn went back to her niche. One can see that she still had screen appeal when she made “Promises! Promises!,” a movie that made at least 12x its budget.