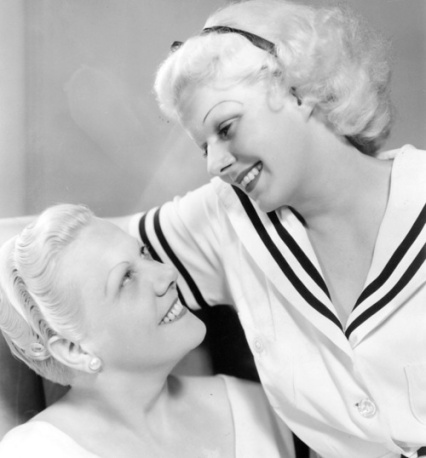 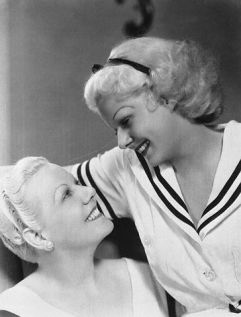 08 Apr 1937, Los Angeles, California, USA — Original caption: Mothers in Hollywood. This is one of a set of pictures showing Hollywood figures and their mothers, with whom they are seen frequently in the film capital. Here are lovely Jean Harlow, and her equally lovely mother. — Image by © Bettmann/CORBIS

Did Mother Jean contribute to the Baby’s death?

[On self treating Jean] She’s being relieved of most of the evil in her. I’m doing wonders…  [On doctors] But they’ll fail. Then they’ll have to call on me. And as a good scientist, I’ll forgive them. – “Mama” Jean according to Arthur Landau in Harlow: an intimate biography by Irving Shulman, 1964

And so began one of the longest running stories in Old Hollywood. “Mama” (it was Mother) Jean killing “The Baby” because of her strict Christian Science religious views but the main question is, is it true?

1964 saw the explosive release of Shulman’s book. In it we learned that Jean was picking up tricks, hitting on her stepfather, and that her mother had caused her death. These rumors continue to this day but there is not one shred of evidence to support anything that pulp writer Shulman and Jean’s former agent Landau claims. 1964 also saw the release of John Pascal’s biography, The Jean Harlow Story. Pascal attempted to stay away from gossip and actually did some research. His version of Jean’s final days is startlingly different:

She went in and rested on a couch in her dressing room. Five minutes later the studio doctor, who had been summoned by Gable, stepped through the door and examined her. She told him of the recent attacks of influenza. The physician examined her thoroughly, the had her removed to her home in a chauffeured limousine. At home, a corps on nurses attended her 24 hours a day. The attack hit her on May 29. By June 3 she had rallied enough so that some of the nurses were relieved of duty. Others stayed on and Jean’s mother was at her bedside literally day and night. The following night Harlow’s condition deteriorated, and she was rushed to Good Samaritan Hospital in Hollywood… Her personal physician, Dr. E.C. Fishbaugh, attended her constantly.

Here is where things gets interesting. The studio head, Louis B. Mayer came over with Howard Strickling to speak to Mother Jean about Mayer’s physician, Dr. Edward B. Jones to look at Jean. As Stenn points out, Jones “had exposed Harlow’s lack of ‘domestic relations’ with Paul Bern” five years earlier. Likely because of this, Mother Jean cited her Christian Science religion to turn down the offer of someone who had betrayed Jean becoming her caretaker. Stenn also points out that when Mother Jean was dissatisfied with Dr. Fishbaugh, she quickly re-hired Dr. Chapman who correctly diagnosed her with kidney failure. Stenn also discovered that while Fishbaugh remained her doctor on record, it was Chapman who actually cared for her. Stenn interviewed Chapman extensively to get to the truth.

So, what was the cause of Jean’s death if not her mother? Was it her hair dye? Influenza? An inflamed gallbladder like the press were told? No, she died of uremic poisoning caused by kidney failure. This likely began after Jean caught scarlet fever when she was in her teens.  Symptoms tend to start out like the flu, hence Jean’s bouts with “influenza” over the last year of her life. Without transplants and dialysis, there was no possible way to save Jean.

Just remember, it only takes one person to write something salacious that becomes fact. Mother Jean was far from perfect. She could be petty, controlling, and mean, but she didn’t kill her daughter.