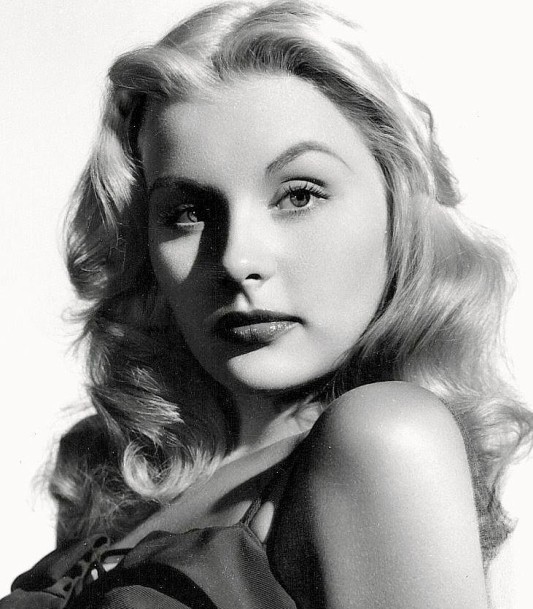 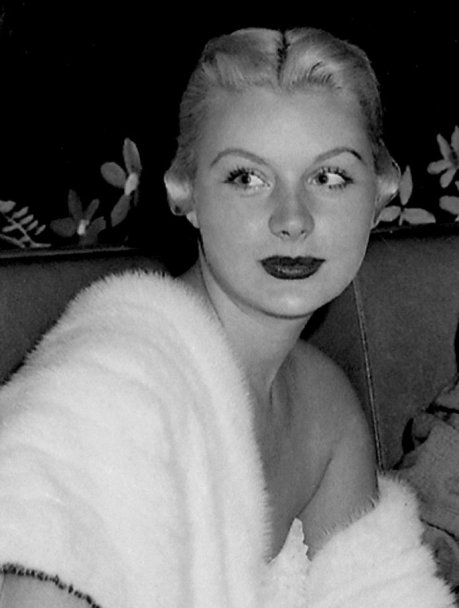 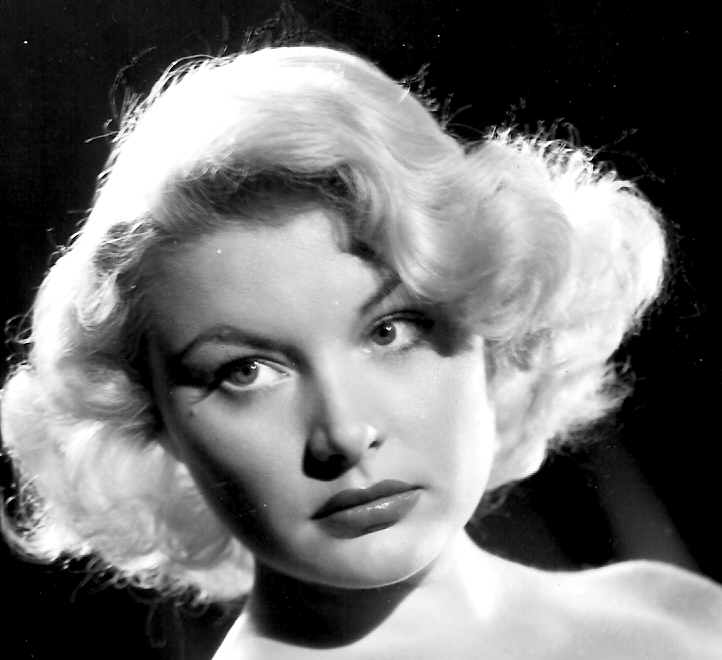 Barbara Payton might not be as remembered as much as her contemporaries, mainly Marilyn Monroe, but she was, at one time, well on her way to becoming a gigantic box-office success. Payton laments about this in her ghostwritten book, “I Am Not Ashamed.” One of the refreshing aspects of Payton is that she truly is not ashamed. She is one of the few who admits that she is to blame for her downfall. Payton admits she was a user and casts light on what starlets were expected to do in exchange for stardom, network contacts, etc.. We like to think that women didn’t partake in this give-and-take system of sex for stardom but Payton exposes the underbelly of Hollywood’s physical currency.

Born November 16, 1927, Barbara Lee Redfield had the chips stacked against her from day one. Her parents were both alcoholics and didn’t bat an eye when Payton dropped out of high school in 1943 although they did make her get her first marriage annulled a few months before.  By 1945, she was married again to a combat pilot, John Payton. Payton stayed long enough to have a baby in February of 1947 but by July of 1948, the couple was separated with their divorce finalized on September 13, 1951.

In September 1947, 7 months after giving birth, Payton landed a modeling contract with the Rita La Roy Agency after hiring a photographer to take pictures of her in fashionable outfits. She started to get around town and was soon noticed by Universal execs who signed her in January of 1949.

Payton’s first film with Universal was “Silver Butte” with Tex Williams. Released on August 1, 1949, the movie has never been released on DVD in the United States. Payton’s next project was announced in April of 1949:

Payton’s option was not picked up by Universal and she was dropped in June or July of 1949. On July 1, 1949, Payton was announced for “Trapped.” This would end up being her breakthrough role. In 1950, she screen tested for John Huston’s “The Asphalt Jungle” but the part would go to a newcomer named Marilyn Monroe. She then screen tested for “Kiss Tomorrow Goodbye” with James Cagney. Enraptured with her, James’ brother William Cagney gave her a joint (Universal and William Cagney Productions) $5,000/week contract. Payton remembered how she got the part (and contract) fondly:

“I burst into the outer reception room and there were about a dozen girls about my age, waiting there. I took one look and knew I didn’t stand a chance. They were all cool looking and at ease. I was hot, disheveled and puffing. What I needed was a trick. I took advantage of the first one that came to mind. I went through the door into the casting director’s office, sat down on the couch, kicked off my shoes and fanned my legs with my dress and said, ‘Shit! It’s a hot fucking day.”

In October of 1949, Payton was spotted with Franchot Tone. Little did she know that it was the beginning of the end…

Payton had been dating Tone for over a year before she was named in a custody suit by his ex-wife, Jean Wallace. Wallace claimed that Payton would be an unfit mother to the two children she had by Tone, who told Wallace that he was planning to marry Barbara in late 1950. When asked by the press about these reports, Tone didn’t comment. In April of 1951, things were reportedly rocky between Tone and Payton but they continued to stay with one another.

By June 29, 1951, Tone was setting their plans to marry in stone by telling the press… 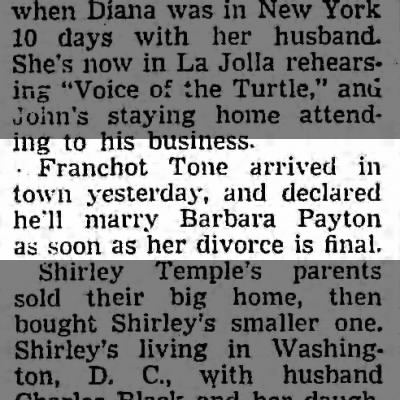 But in July Barbara was with Tom Neal, a b-list beefcake actor… 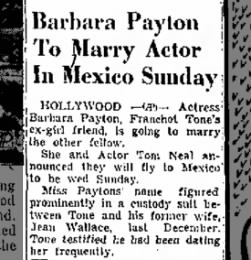 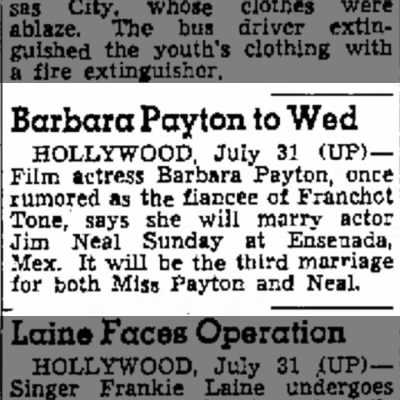 Payton was unable to marry Neal due to her divorce not being finalized until September 13, 1951. It was likely for the best because by August 16th… 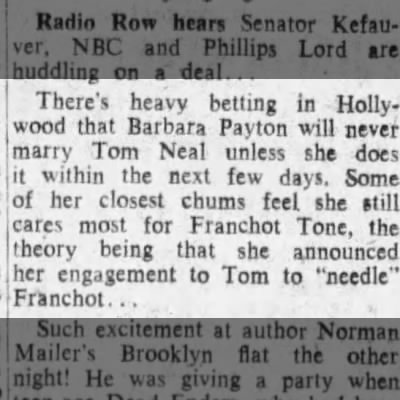 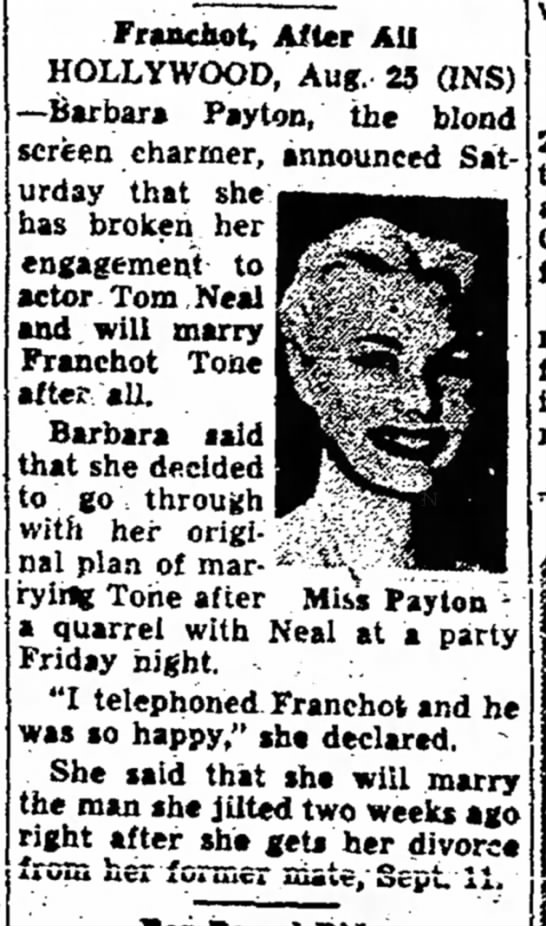 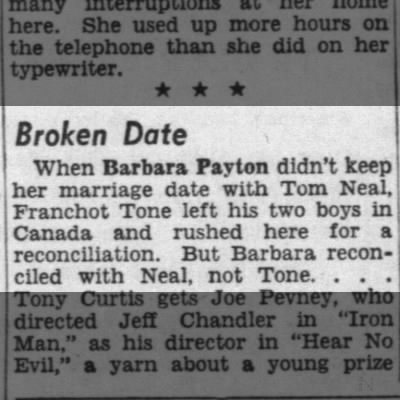 Finally, everything came to a head in the wee-hours of September 14, 1951. Barbara made front page news…

Payton insisted that Tone did not punch first, informing the press that Neal was “a brute.” Later, in her book, Payton changed her story, stating that Tone was drunk and had called for a meeting between the three of them. A drunken Tone then tripped over one of Neal’s barbells at her apartment, “a steel reminder that Tom had been around my house,” and punched Neal who “threw about ten fast punches that crushed Tone’s nose and got him a free ride to the hospital.” Tone suffered multiple facial fractures, body fractures, and a concussion. There was concern that Tone may have a stroke or die if there was a clot. Payton was at his bedside as much as possible.

A devastated Payton announced her engagement to Tone on September 17th, 1951. She even threw out the idea of getting married at his hospital bedside. On September 28, 1951, Payton announced that she would be marrying Tone that evening, at 7 p.m. Barbara remembered it as being in May of 1951 in “I Am Not Ashamed.”

The marriage was extremely short lived. Payton returned to Neal and by May she was divorced from Tone. 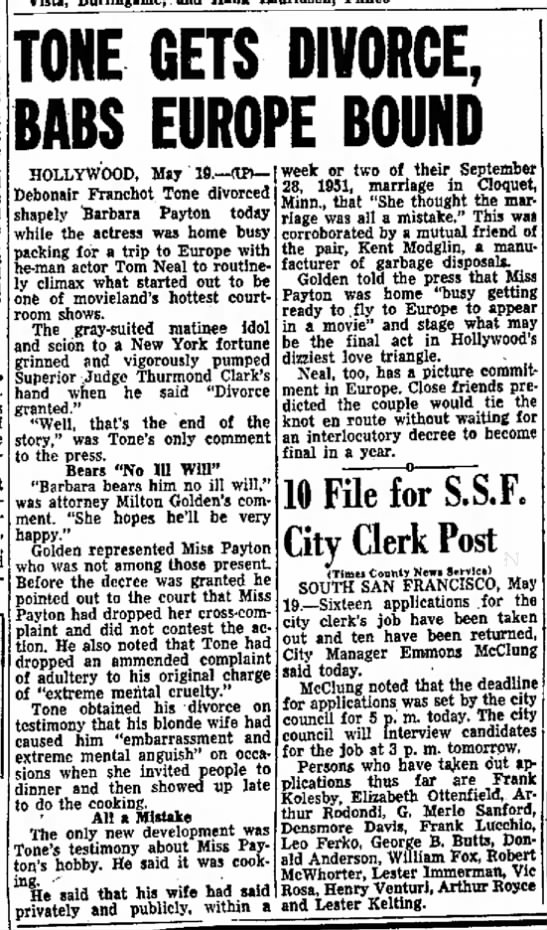 If Payton had stayed with Tone it’s possible that she could have recovered from the publicity nightmare. Tone was a household name and had been for years yet Payton had to follow her heart. Riding off of their publicity, Neal and Payton starred in various plays and a few movies. Neal and Payton publicly flirted with marriage but it never materialized. By 1955, Payton’s career was over yet the main affair of her life, with the press, was far from over.

In 1955, Payton was charged with passing $125 in bad checks to grocers. She was found guilty.

By 1957, Payton’s life seemed to be going a bit better. She was remarried and in shape. She had started a business with her fourth husband in Mexico and was flirting with the idea of getting back into movies. Payton recalled her time in Mexico fondly in her memoir and frequently talks about how much she loved it. 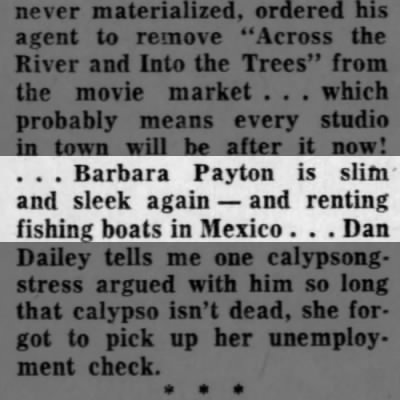 Yet her happiness was short lived. In 1962, Payton was arrested multiple times. These arrests led to her receiving $1,000 in exchange for her memoirs. 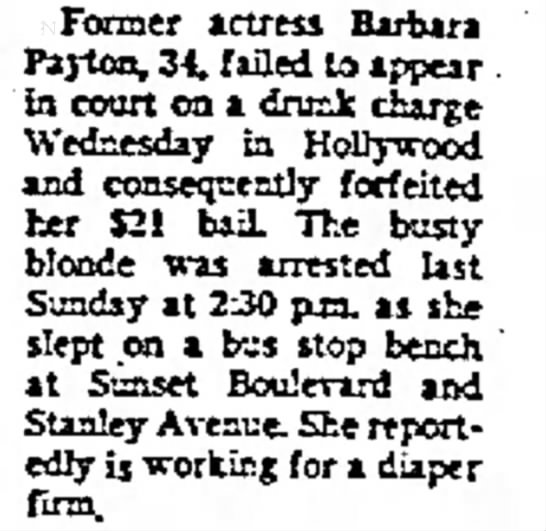 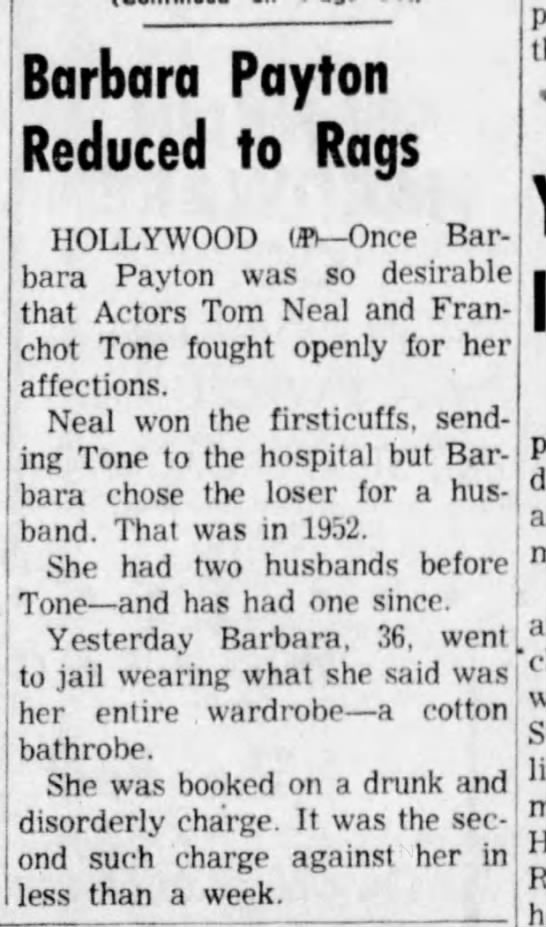 In 1963 Payton was arrested for soliciting an officer.

Another famous blonde was up for filming Payton’s life story but it sadly never materialized. 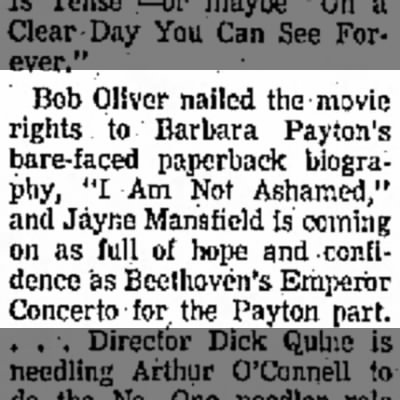 Penniless, Payton passed away in  1967. She had lost everything and never made it to 40. One can only imagine what Barbara could have accomplished if she hadn’t squandered her life, something Payton readily admits. Hollywood can be a dark place and Payton discovered and explored the absolute darkest corners.

Flowers placed on Payton’s grave in California by a friend for a friend and me. RIP sweet girl. 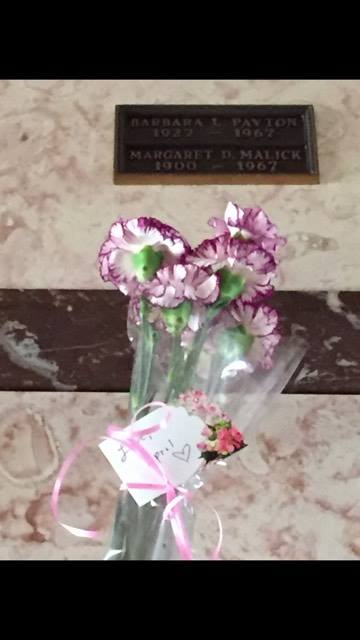 One thought on “Barbara Payton”