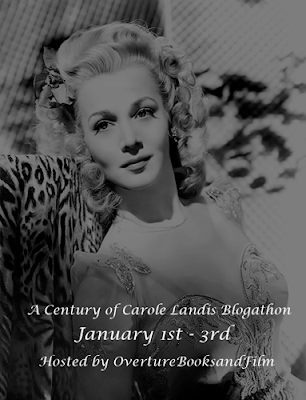 Before I begin, I’m not posting any of Carole’s death pictures. You can find them quite readily on different sites if you really want to see them but I have no interest in sharing them.

On July 6th, 1948, Carole Landis was on the front page of newspapers across the United States. Was it because of a new film? A reconciliation between her and her fourth husband, W. Horace Schmidlapp? Sadly, no. Carole had been found dead the day before in the bathroom of her Brentwood home, reportedly from suicide. The press was left in disbelief. Why had a beautiful, successful actress chosen to die by her own hand? The press, and public, wanted answers and from the 6-13th, Carole’s death and the immediate ripples from it were headline news. I haven’t put any of my own thoughts in this piece. The piece is filled with numerous links to newspaper stories from the time so that one can get a “feel” for what Americans were told about Carole’s death in 1948.

Carole hosts a large party for the Fourth of July. The party began at noon and ended around 4 pm being Carole was expecting her married boyfriend, Rex Harrison, to join her for dinner. Harrison and Carole shared a dinner of chicken, salad, and a lemon chiffon pie that Carole had made herself. Harrison would say that he left at nine but there are unconfirmed reports that he left around midnight. The couple supposedly broke up and Carole proceeded to pack up all mementos of her relationship with Rex, drop them off at actor Roland Culver’s home. She also left a note saying that she was going to kill herself. Culver wouldn’t find this package until the following day and proceeded to burn the contents. You can read more on Carole’s last day here.

Carole overdoses at roughly 3 am although the police initially believed it to be at 1 am. Carole’s body would not be discovered until 3 pm by her maid, Fanny Mae Bolden, and Harrison, who had been trying to talk to Carole throughout the day being they had lunch plans together at 11 am, in the bathroom. Carole was wearing a white lace shirt, a blue-and-white plaid skirt, and gold sandals. She was curled up in a fetal position, her head laying on a brown leather jewelry box. She was wearing a St. Christopher metal and held the Lord’s Prayer, inscribed on a ribbon, as well as an envelope (“Red – quick – two hours. Yellow – about five – can take two. Use for severe pain” was written on the front) containing a single, white pill in her left hand. She wore a wristwatch engraved with “C.L.” Bottles of Seconal were found on Carole’s bathroom counter. A note, addressed to her mother, was found on a table in her dressing room, next to a perfume bottle. Bolden would recall Harrion’s face twisting up while he asked Carole’s lifeless body, “Oh Honey, why did you do it?”

Here is where Harrison’s behavior becomes rather odd. Harrison and the maid both agree that Harrison discovered Carole and then came down to tell Bolden that Carole was dead. He then went up with Bolden and felt for a heartbeat, claiming that he felt a pulse. Harrison claims to have gone through her address book to find her doctor’s number but wasn’t successful. He then went home, called his doctor, discovered that his doctor was away, but agreed for the doctor who was temporarily overseeing Harrison’s doctors practice should come at once. Harrison then called his neighbors to find a doctor who was closer. One of them suggested calling St. John’s hospital which suggested calling the police. The police arrived at 4 pm. Carole’s mother, Clara Ridste, and sister, Dorothy Ross, arrived around 7 pm, with Carole’s mother asking, between sobs, why nobody called her before.

The press actually learned about Carole’s death on the 5th, even before her mother did, but because it was too late to print in night-editions of the paper, it was reported nationwide on the 6th. The police made a statement saying that Carole’s death was “definitely a suicide.” Carole’s suicide note was hastily printed. You can see the note here. Harrison declared that he had discussed business with Carole the night before but insisted that they were not having an affair, even though Bolden claimed otherwise. The press wanted to know a motive. Carole’s attorney, Jerry Gieseler, insisted that the suicide wasn’t because of her upcoming divorce. Carole’s press agent, Ed Ettinger, spoke of Carole having financial woes but insisted her career hadn’t made her unhappy and that she had plans for the future. Carole’s fourth husband said he was “shocked.” Carole’s friend, Mary Kline, insisted that it must have been accidental. Columnist Dorothy Manners was depressed but not shocked, insisting that Carole died from poor finances and a broken heart. Carole’s father, Alfred Ridste, insisted it couldn’t be suicide.

The press intensified their hunt for a motive for Carole’s death. Carole’s mother’s thoughts on Carole’s death were released. She thought that Carole’s death may have in fact been suicide because of financial issues. Giesler rebuked the claim, stating that Carole was financially “sound.” Harrison, facing scrutiny for his overly friendly relationship with Carole, agreed with her mother. A relative by marriage, Evelyn Ross, declared that Carole was despondent over her inability to hold a husband or have a family, and theorized that those two factors led to her suicide.

Papers announced that Harrison was to make an official statement with the coroner at 2:30 pm that day. Carole’s brother, Lawrence Ridst, also released a statement that day, saying that the family knew nothing about a supposed second suicide note. Whispers of this note have come under fire over the years although it is now generally accepted that Carole had written a second note, addressed to Harrison, that was destroyed by a police officer who was bribed by Lili Palmer, Harrison’s wife. More of Carole’s autopsy report was released. It detailed that Carole was unable to have children, that her blood alcohol content was .12 (three points under “very drunk”), and that she had passed away from a “large amount” of Seconal. It was also announced that there was fight over who would be the executioner of Carole’s will, her mother or her former attorney. Carole’s family also demanded an inquest into Carole’s death while Geisler theorized that her death was a “sudden shock.”

Harrison’s inquest was partially released. Harrison claimed to have left Carole’s home at 9:30 pm on the fourth and Carole’s time of death was estimated to have occurred four hours later, at 1:30 am. It was also announced that Carole’s funeral had been planned for Forest Lawn.

Carole’s funeral is held on the 10th. She wears a blue dress with sequin butterflies on the sleeves and shoulders – described as her favorite. While she was originally holding an orchid bouquet in her right hand, it was replaced by one made of roses. Hundreds of people attended the ceremony (for the best coverage click 1 and its continuation 2) and her pallbearers included friends Cesar Romano and Bill Nye (Carole’s makeup man). Harrison and his wife, Lili Palmer, attended as well although Harrison left before viewing Carole’s body.

Carole’s will was scheduled to be read this day. Jerry Geisler was the decided upon executioner. He made a statement saying that Carole’s mother was the likely beneficiary of the entire estate but that her estate was likely worth less than $100,000.

It is announced that Carole’s will reading will be held on this day instead of the 12th due to time conflicts within Carole’s family. Carole’s will is reported by family to be worth roughly $20,000. Geisler said in a statement that her estate was worth just south of $50,000 after Carole’s fourth husband agrees to pay out his divorce settlement to her, which was an additional $30,000. Everything went to Carole’s mother, who would get certain material things at the time of her death and everything else put in a trust.  A soldier writes to the Tampa Bay Times, declaring that the publication of Carole’s death pictures was unnecessary.

Today: Carole’s family maintains to this day that Carole was likely murdered by Rex Harrison or possibly found by him and left to die. You can read their thoughts here. Jessica P., from Comet Over Hollywood, disagrees with their theory. You can read her thoughts here. Whatever happened to Carole, her death was a tragedy and she deserves to be remembered for the sweet, bubbly person that she was.