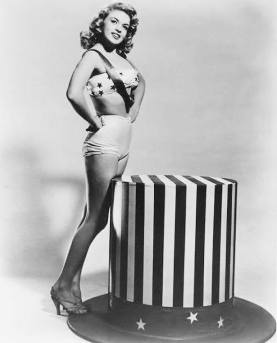 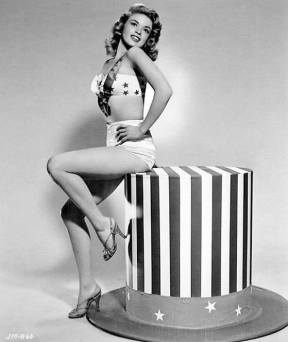 What better way to celebrate the fourth than to look at Jayne’s time entertaining the troops? Jayne made sure to entertain our servicemen throughout her career and thought nothing of going into war zones to give our men in the service something to smile about. Jayne first performed for our men in uniform in while her husband was stationed in Georgia for army training. She performed in the popular skit show, “Anything Goes.” Once she reached stardom, Jayne continued showing support.

From 12/17 until 12/29, Jayne performed at numerous bases in Hawaii, Okinawa, Wake Island, Japan, Guam, and Korea. Jayne played a spy trying to extract information from Bob Hope in one of her skits as well as performing with Mickey Hargitay. The Los Angeles Times reported how Jayne stood out in the rain for servicemen to get a picture of or with her.

From 12/21 – 12/28, Jayne performed for the troops in Alaska. Jayne performed a couple comedy skits, including one where she played a servicewoman trying to pick up servicemen. Jayne parents, Vera and Harry, were flown in by Bob Hope himself.

From 12/20-12/29 Jayne performed in Newfoundland, Labrador, and Baffin. Jayne’s performance in Romeo and Juliet can be seen below as well as a silent video in color of Jayne performing.

Jayne also made numerous appearances throughout the years including a 1966 Acapulco appearance, a six week tour in 1967 of Vietnam, and countless visits to military bases during her life when she was near them. Jayne’s last military visit was the day before her death, when she went down to visit the men of Keesler Air Force Base in Biloxi, Mississippi.

View all posts by AprilRenee

Marilyn Monroe photographed by Sam Shaw during filming of The Seven Year Itch, 1954.
“She was a fair-haired, happy-go-lucky kid, always popular with the other girls. Not too pretty, but she had an attractive, winning smile. She was a pupil who appeared not to take notice of instruction, yet when called to repeat a routine she had apparently showed no interest in, she would be step-perfect.” - Ernest Belcher on Betty Grable.
History about our wedding chapel and the Old Hollywood weddings hosted there article is out - link in bio.
I know I’ve been MIA but I’m getting married! After much debating, my fiancée and I decided on The Little Church of the West which has seen the likes of Deanna Durbin, Zsa Zsa Gabor, Betty Grable (who never actually made it to her ceremony and instead got married across the street), and Judy Garland! @littlechurchofthewest
Marilyn poses for Earl Thiessen in a potato sack dress, 1951.
Happy birthday to @therealmariskahargitay !!!
%d bloggers like this: