Recently I was talking to a dear friend about Veronica Lake’s autobiography, Veronica. She brought up a great question, “Do you think she lied?” Pondering for a bit I responded with “She told the truth according to her.”

It seems like a bit of a wishy-washy answer. Do stars blatantly lie in their books? Yes, some most definitely do. Some are ghost-written. Others are co-authored. Still, others are straight from the subject, true autobiographies. The following reviews are going to be short and sweet. I want you to come to your own decisions. These are the books in my collection: 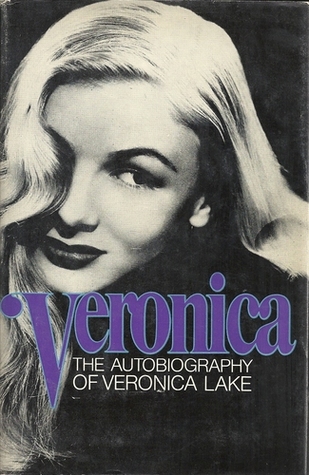 I have the softcover edition of this one that features a full length picture of Lake in white. Note that the book was first released in the UK in 1969 but mine is from the third printing under Citadel Press in 1972. Supposedly Lake was desperate for money and resorted to writing this book with Donald Bain. It’s very candid and rings true. I have seen people complain about sidestepping by Lake on issues but I think she is as frank as one can expect somebody to be with a public who had turned its back on her 20 years before its publication. The book is not written maliciously, unlike others on the list. It’s just Veronica telling her side. There are three books in total on Lake. One is a picture book, one is this one, and one is the horrendous Peekaboo. This is the closest, in my opinion, that one can get to the real Veronica Lake. Note that this book can be pricy but it’s well worth it.

One of my favorite websites sums it up better than I am able to: “Veronica: The Autobiography of Veronica Lake is a tender, wry, and frank look at the life of one of Hollywood’s most troubled, gorgeous, misunderstood, and forgotten (sadly) stars.”

You can read the full review by clicking here. 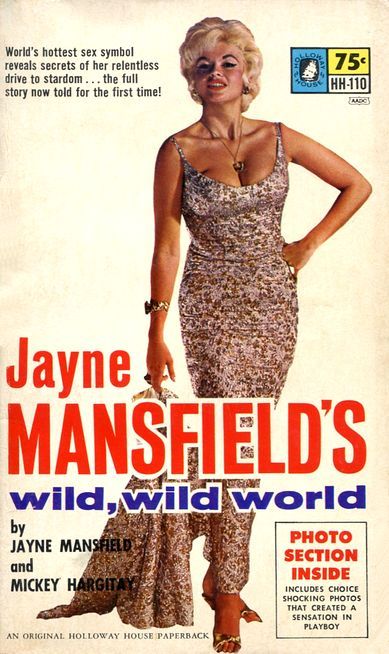 I think most people know that Jayne is my favorite. What’s not to love? This book has been questioned a bit about who actually wrote it. Luckily I own one of Jayne’s letters on it! I can attest that Jayne did in fact write the book although I am sure there was some polishing by editors at Holloway House. Back in 1958 Holloway approached different celebrities to get them to write their autobiographies. Many made deals including Jaynie and Errol Flynn.

Jayne originally planned the book to be much longer. It was going to be her life story along with an advice book. It ended up becoming much shorter with very basic details about her life along with Mickey’s chapters seeing as how it was written as her star was declining. That doesn’t take away from its charm. It really is eye-opening and the love that Mickey and Jayne have for one another comes through. Like Veronica, this one can be pricy but well worth it. 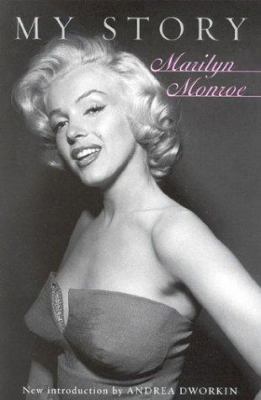 Probably one of the most controversial of all blonde autobiographies is My Story. Did she have anything to do with it? Was it completely ghost written? Did Milton make parts up? Okay. Here’s what we know. The book was written with Ben Hecht, a famous ghost writer. He conducted a series of interviews with Marilyn in 1954. The manuscript was leaked to Australian and U.K. newspapers by Hecht’s publisher and Marilyn refused to continue writing her story with Hecht. You can read the original version of My Story below courtesy of Trove. 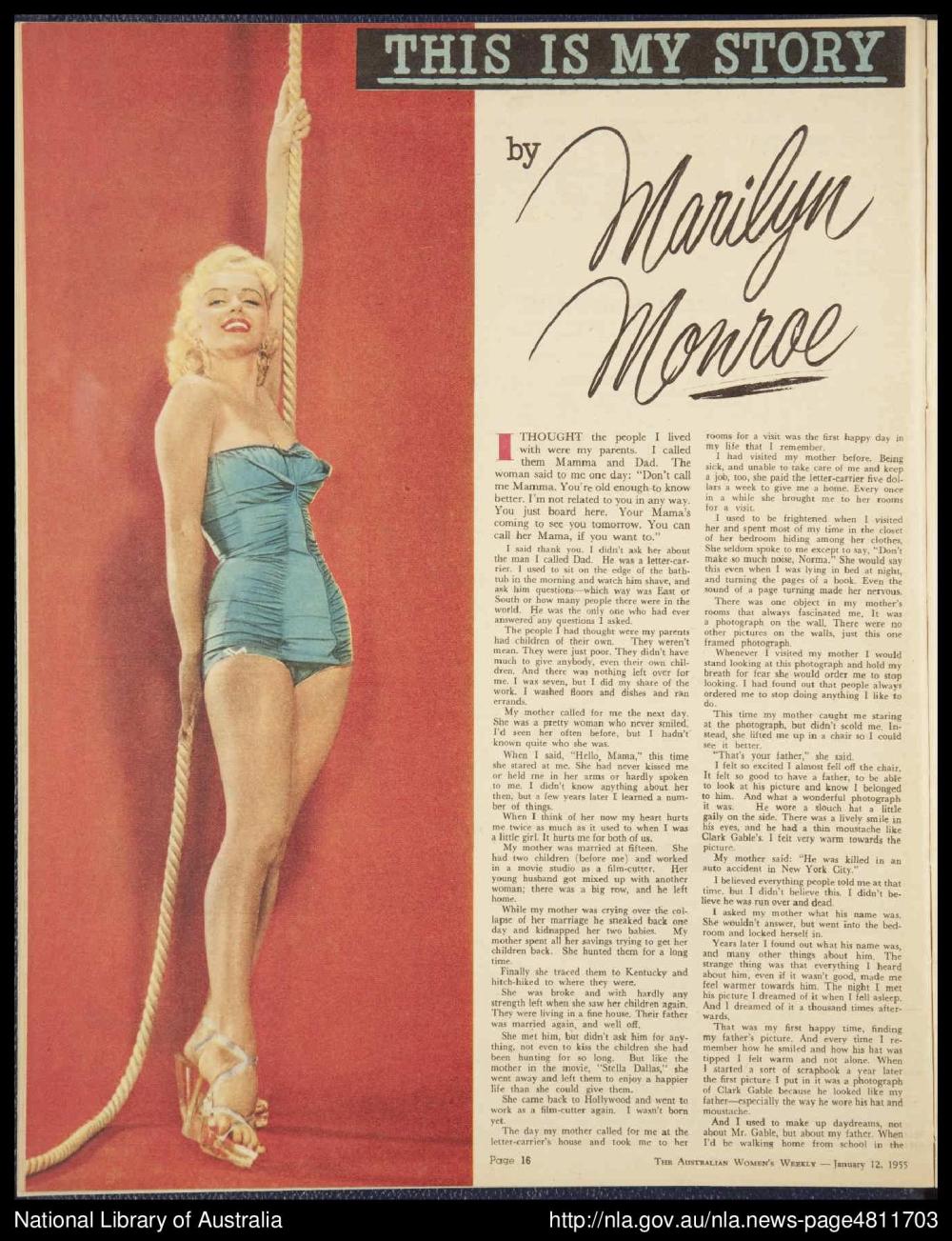 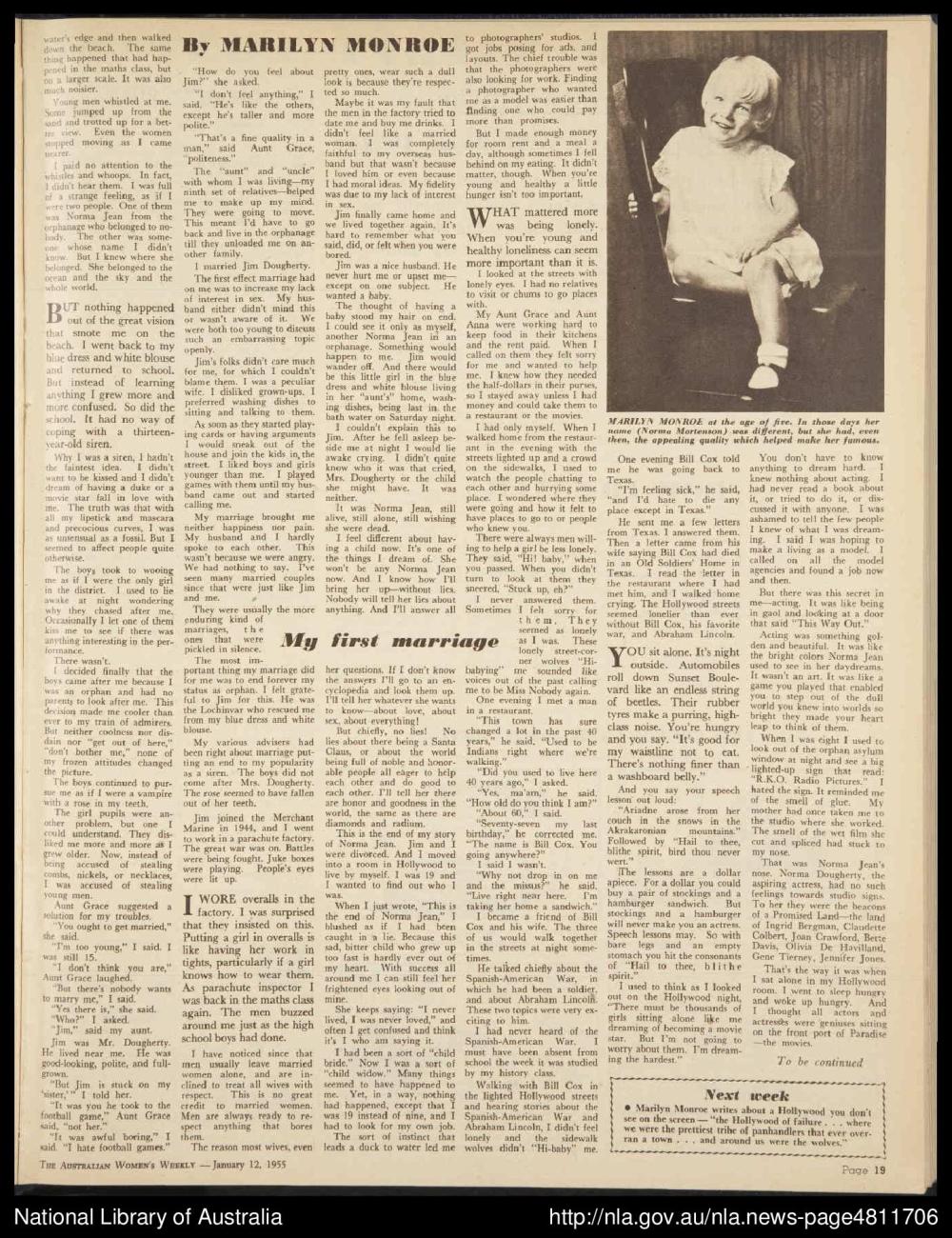 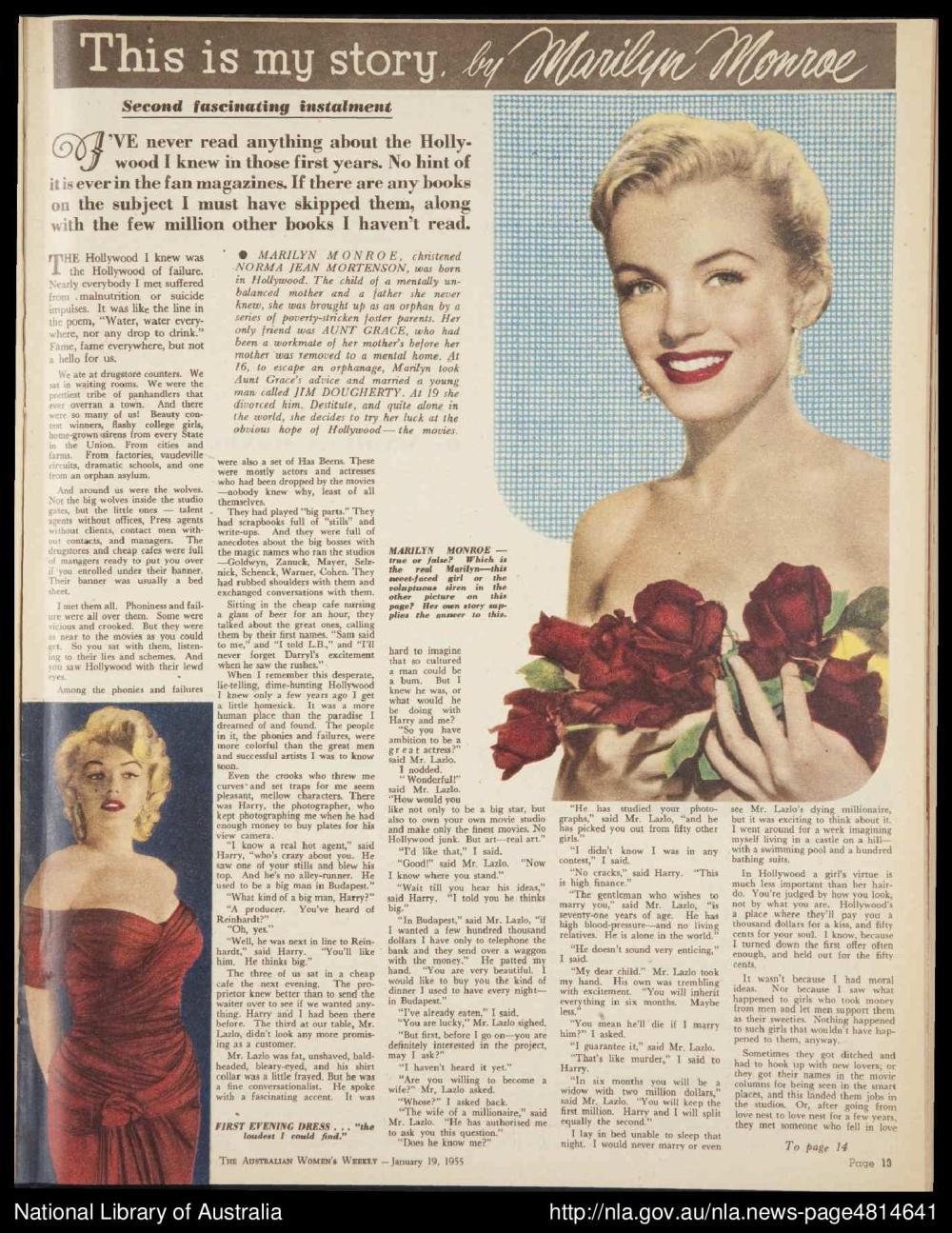 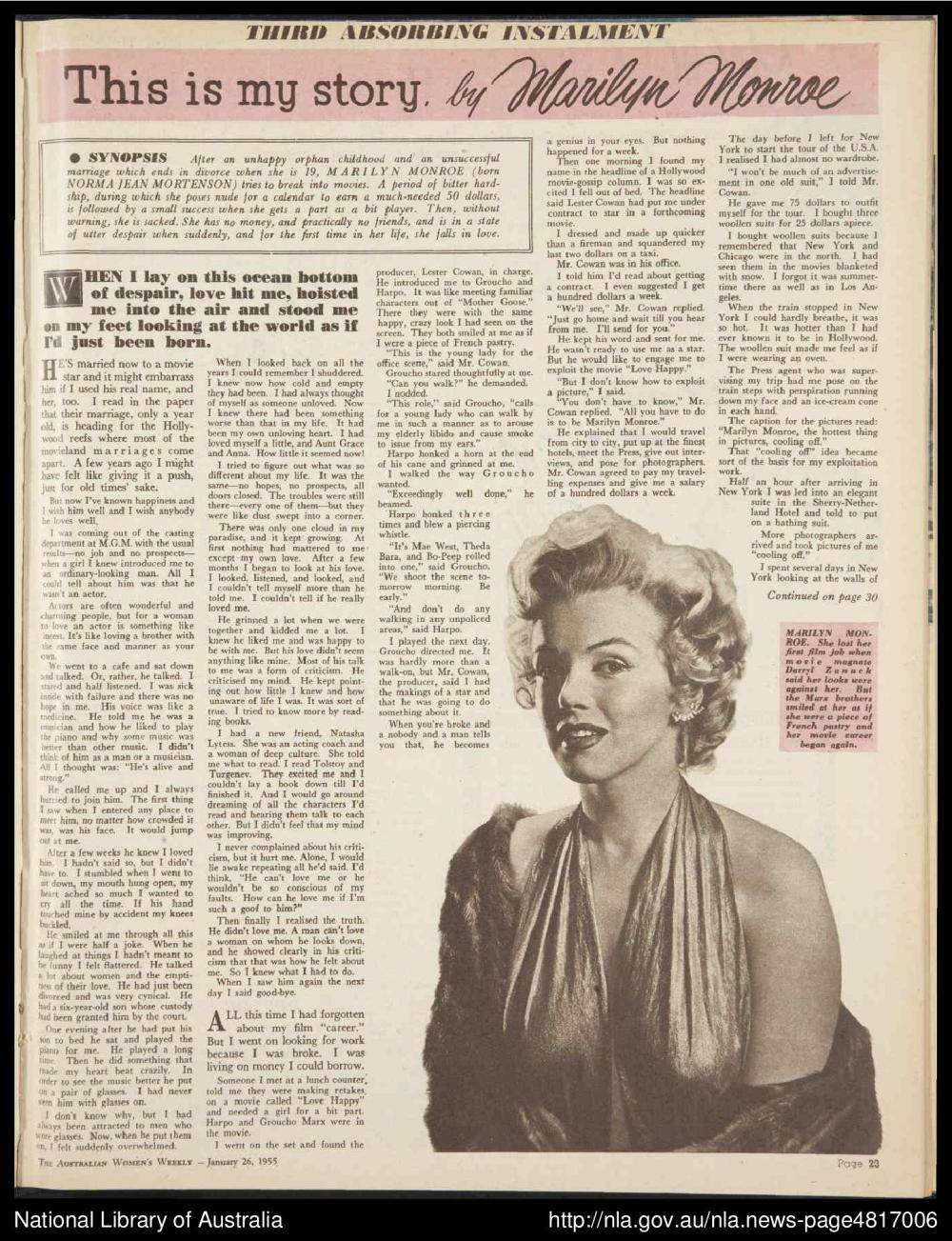 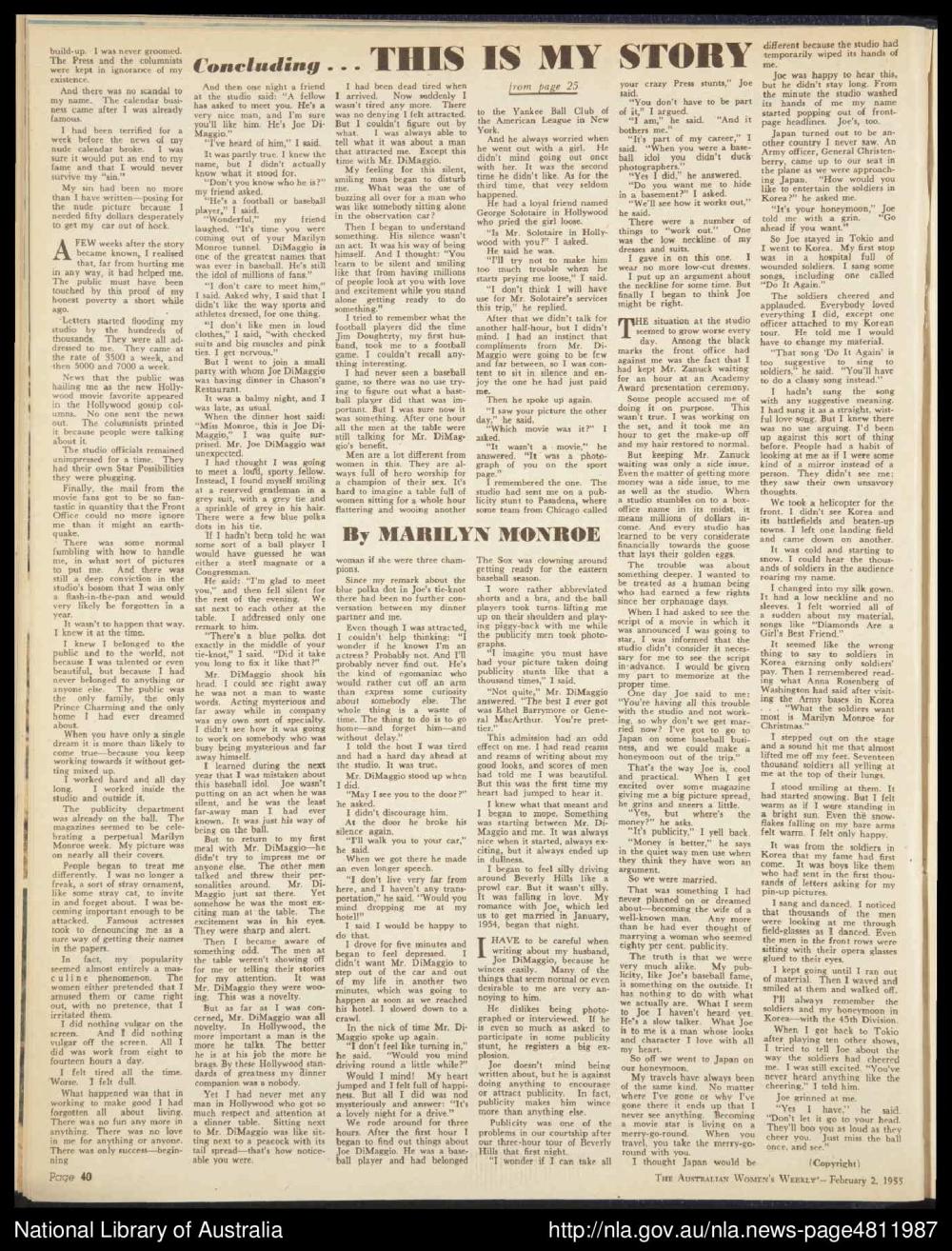