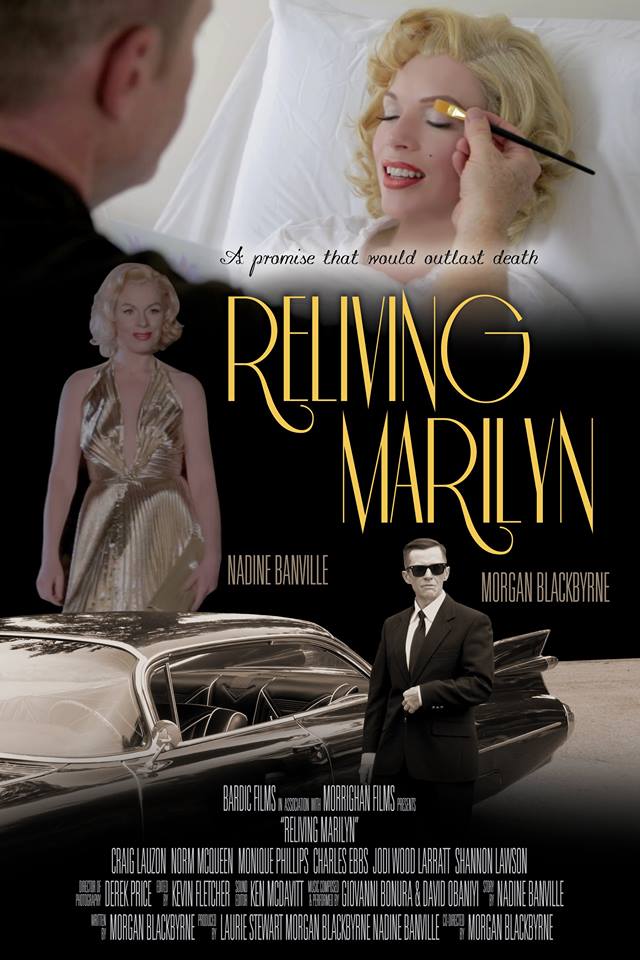 Reliving Marilyn has been in production for years now and finally got released on Amazon Prime both in the US and the UK. Nadine Banville plays Marilyn while Morgan Blackbyrne plays Whitey Snyder, Marilyn’s real life long-time makeup artist. At the time of writing, it has 3 stars on Amazon US and 1 star on Amazon UK. But does it really deserve so much negative feedback? Let’s dive in.

Let me start by saying I am not going to dissect casting from a looks standpoint or costume quality. The filmmaker/director/writer/producer/star, Morgan Blackbyrne, has been very honest about the film being made on a $50,000 budget. I have to say, the film looks great for being made on a shoestring budget. Some of the locations chosen were absolutely breath-taking and the cinematography is gorgeous. Instead, I’m grading the movie on accuracy, acting ability and the strength of the script. This review is completely unbiased (shockingly, I’m able to check personal feelings at the door). I also have not left an Amazon review due to having my own site to share my feelings.

We all know I’m a stickler for accuracy. Going in, I already knew there were going to be a couple sticking points I wouldn’t agree with (like the Ella Fitzgerald story). Being the relationship between Whitey and Marilyn is not as well documented as one would hope, I also knew there would be a fair amount of creative license. Some of it definitely works. We know Whitey and Marilyn had a deep friendship, and Reliving Marilyn does capture the caring, nonsexual tone of their relationship quite well. Some of it I found a little grating (Like Whitey saying he knows Marilyn didn’t kill herself when Whitey himself detailed her pill addiction, or using a modern-day $20 in the money clip) while other attentions to detail were welcome, like Marilyn’s 36th birthday card. Overall though, I would say the movie captures the essence of their relationship with a fair amount of accuracy.

Nadine Banville is absolutely gorgeous. I’ve seen a few people complain about her accent and I do have to agree that it’s at times distracting; however, that really shouldn’t be held against her. Banville does capture a certain part of Marilyn’s tenderness on screen, and you can’t help but feel for her. Do I think it’s the best performance of Marilyn I’ve ever seen? No, I don’t, but I think she does an admirable job in taking on the bombshell.

Blackbyrne’s performance as Whitey has definite peaks and valleys. When he isn’t hamming it up with near-comical facial expressions and loud, exasperated sighing, his performance is palatable. His moments to shine are when he’s having honest conversations with Banville’s Marilyn, helping her overcome depressive moods. One can definitely picture the real Whitey having the same conversations with Marilyn.

No one really shines in the supporting cast except for Jodi Larratt as Jane Russell. The hair, appearance, and mannerisms are pretty spot on for what we know about Russell’s character. It’s a shame more attention wasn’t placed on that relationship. I’d go to a movie starring Larratt as Russell.

The script is the weakest part of the film. You really have to know Marilyn to understand what’s going on. The film jumps all around between 1946-1962, with no rhyme or reason. The timeline is incredibly spotty. The one thing I did actually like with the format was Whitey looking at pictures of Marilyn in the morgue and remembering the event pictured. If these scenes had all been in order, it would have really helped the film to move at a great pace. Instead, he looks at random photos from random years and we might jump from 1954 to 1952 to 1958.

When one watches the credits of the film, they’re bound to notice the misspellings of Marjorie Pletcher and Leon Shamroy’s names. I bring this up because I think it sets the tone for the whole movie – a valiant effort, hearts in the right place, little tidbits fans are sure to appreciate, but an overall poor job in execution. This has nothing to do with the budget. It has to do with a poorly formatted script and at times rather odd performances. Don’t get me wrong, we all have these oversights in things we create. I know my first book wasn’t up to the same level of writing I would produce now, and I fully own up to that.

Is this the worst film I’ve ever seen? No, it’s not. Is it the best Marilyn biopic I’ve ever seen? Again, no. I think it’s passable for die hard fans who want to see another fan’s perspective on Marilyn. I’m just not at the level of fandom where I think every fan produced piece is the best thing I’ve ever seen. You can’t judge it based off of network and studio produced films. It’s the perfect example of a film that should have been a short, but was expanded to feature length. If this movie had been 30 minutes in chronological order, I would have definitely given it a much higher rating. At certain points, it just feels tedious.