Day three of our Jayne Memorial week! Today I want to delve into some common misconceptions on Jayne. 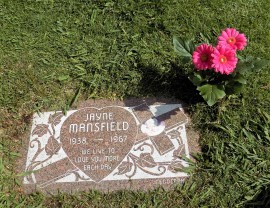 Fact: Absolutely not true. This comes from May Mann’s book. Jayne sent out 100 invitations to her wedding with 90 going to the press.

Fact: Evidence used against Jayne is that a life photographer was on the rescue boat and that Jack Drury, the third person on their boat, worked in public relations. Jayne refused to talk about the incident and would become teary eyed and defensive when questioned later on. It also seems unlikely that Jayne would subject herself to death. The LIFE photographer was there to get the first possible shots being the first paper or magazine to get them would receive a large amount of money for rights. Most of Jayne’s friends were in the press so it was in no way unusual for Jayne to hangout with them.

Rumor: Jayne was a Satanist

Fact: Jayne met Anton LaVey once, in 1967. Her “conversion” supposedly happened in October of 1966 but there are no records of their meeting in newspapers and Jayne herself adamantly denied it which you can read more about in my article here. LaVey would later exaggerate their relationship which the Church of Satan itself admits on their website. A few months after Jayne’s death, LaVey started claiming that he had cursed Sam Brody. Again, nothing to support this while Jayne was alive.

Fact: Jayne was not decapitated. Most agree that it was closer to scalping. The decapitation rumors stem from Jayne’s wig being on the dashboard. Jayne had been wearing wigs since the early-mid 1960’s because of hair loss from bleaching her hair.

One thought on “Misconceptions about Jayne”